Ecosystems are said to be balanced and dynamic

Welcome to Catalytic, a blog to discuss the discussion of subject matter from Higher Education, High School, Middle School and Elementary Schools. This time Katalistiwa will discuss a question that is often asked in school exams. The questions are: Ecosystems are said to be balanced and dynamic 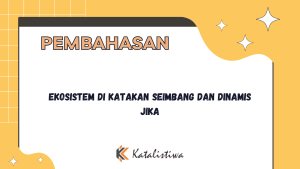 Ecosystems are said to be balanced and dynamic

a. there is no competition between individuals in it
b. the number of producers is not abundant
c. abundant number of consumers
d. the number of decomposers is in balance with the producers
e. the number of all components of the ecosystem according to their respective functions

The answer is e. the number of all components of the ecosystem according to their respective functions.

A detailed explanation of the Ecosystem at Say Balance

The term ecosystem was introduced by an ecologist named AG Tansley from English in 1935. Ecosystems are grouped into three namely aquatic, terrestrial and artificial ecosystems.

Ecosystems are formed by two kinds of components, namely: