What were the Conditions of the People During the Colonial Rule

Welcome to Catalytic, a blog to discuss the discussion of subject matter from Higher Education, High School, Middle School and Elementary Schools. This time, Katalistiwa will discuss a question that is often asked in school exams. The question is: What was the condition of the people during the colonial era? 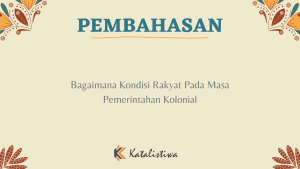 What were the Conditions of the People During the Colonial Rule

The condition of the people during the colonial period was very miserable, miserable and so on because economy colonial implement monopoly system, especially in the field trading so that the economic capacity of the (native) community was completely cut off. In addition, a number of policies also burden the people because they are made into cash cows without proper compensation.

Detailed discussion of the Colonial Period

At the beginning of the arrival of Europeans in Indonesia, the people welcomed them kindly because it was a character that was strongly attached to the archipelago. Unfortunately, the Europeans soon became greedy and intended to monopolize trade in the east.

All the ways they do, including terrible ways that torment the people. All people's land was confiscated, those who then worked on their own land were considered only laborers who worked on colonist's land, so they had to pay taxes or hand over their crops by force. In addition, many indigenous peoples are forced to work without adequate compensation.

In essence, the colonialists only wanted the greatest possible profit in the Archipelago without caring about the suffering of the people at that time.