Determine the Motions to be Debated

Welcome to Catalytic, a blog to discuss the discussion of subject matter from Higher Education, High School, Middle School and Elementary Schools. This time, Katalistiwa will discuss a question that is often asked in school exams. The questions are: Determine the Motions to be Debated 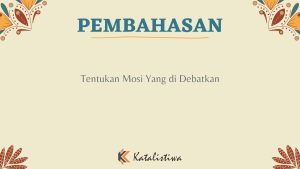 Determine the Motions to be Debated

1. In my opinion, brawls between students do not only occur because of the brutal nature of the children. More than that, brawls occur because children get bad examples from the nation's leaders who are busy fighting for power and blaspheming each other. television and internet freely present a variety of brutal actions that make children tempted to imitate.


To determine the motion that is being debated, let's first study the meaning of motion.

Motions are debate topics in the form of positive statements that will determine the direction and content of a debate. In the debate, the government team (positive team) will support the motion, while the opposition team (negative team) will present arguments that neither support nor reject the motion. In choosing debate motions, the motions chosen must have balanced advantages and disadvantages. Movement must also be focused on an event.

From the excerpts of the debate given, the following conclusions can be drawn:

1.Quotation:In my opinion, fights between students do not only occur because of the child's rude nature. More than that, brawls occur because children get bad examples from the nation's leaders who are busy fighting for power and slandering each other. television and the internet also freely present various brutal acts that tempt children to imitate.

Motion:Clashes between students that tend to get riotous are caused by the bad example of the nation's leaders.

3.Quotation:The brutal actions of football fans that have taken place recently are proof that our society is sick. The people are tired of the harsh demands of life, football, which should be an arena for upholding sportsmanship and forging unity, has become an outlet for people's dissatisfaction with life. The leader's appeal and decisive action by the police did not stop the brutal actions of Indonesian football supporters. The death of two Indonesian football supporters in a brawl between football supporters at the recent TNI Cup match further strengthens our claim. society is sick.

Motion: The brutal action of football fans occurs because they are not satisfied with life.

4.Quotation:Many people think that changes in the weather cause a person to get sick easily. But what happened was not like that. When a person is physically caught in the rain, exhausted and then exposed to germs, he will get sick more easily. This means that the disease is caused by germs, not weather changes.

Motion:Unfavorable weather makes it easy for disease to attack the immune system.

5.Quotation:Refusal to implement the Computer-Based National Examination (CNA) should not have happened. On the other hand, UNBK must be supported, besides being able to reduce paper use, speed up the accurate assessment of exam results, it can also reduce the number of question leaks.

Motion: Rejection of the implementation of the Computer-Based National Examination