When did the Rengasdengklok Event Occur?

Welcome to Catalytic, a blog to discuss the discussion of subject matter from Higher Education, High School, Middle School and Elementary Schools. This time, Katalistiwa will discuss a question that is often asked in school exams. The questions are: When did the Rengasdengklok Event Occur? 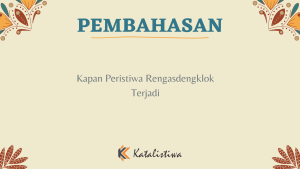 When did the Rengasdengklok Event Occur?

Explanation of the Rengasdengklok Event

On August 14, 1945, the allies dropped atomic bombs on two cities in Japan, namely Hiroshima and Nagasaki, which caused Japan to surrender unconditionally in the hands of the allies. The news of the surrender of the Japanese in the hands of the allies reached the ears of Indonesian youths who worked in Japanese offices. Sutan Syahrir heard about it and immediately met Ir. Soekarno and Moh. Hatta to deliver the news.

Young people continue to negotiate with Ir. Soekarno proclaimed Indonesian independence so that on August 16, 1945, youths kidnapped Soekarno and Hatta at 04.00 WIB in the morning to Rengasdengklok. This trip was escorted with the help of PETA soldiers. Arriving at Rengasdengklok, Soekarno-Hatta was exiled to the house of a farmer of Tinghoa descent named Jiauw Ki Song. While in exile, Soekarno-Hatta negotiated with youth groups. The negotiations aimed to urge Ir Soekarno to immediately formulate and proclaim Indonesian independence so that Indonesia would no longer fall into the hands of the allies due to Japan's defeat. However, the negotiations were rejected by the old group who thought that the Indonesian proclamation had to go through the PPKI.

Meanwhile, Achmad Soebardjo negotiated with youth leaders in Jakarta to agree that Indonesia's independence would soon be proclaimed in Jakarta. After the negotiations, Achmad Soebardjo was assisted by Jusuf Kunto to re-elect Soekarno-Hatta to be brought back to Jakarta.