What was discussed in the First Session of the BPUPKI

Welcome to Catalytic, a blog to discuss the discussion of subject matter from Higher Education, High School, Middle School and Elementary Schools. This time, Katalistiwa will discuss a question that is often asked in school exams. The questions are: What was discussed in the First Session of the BPUPKI 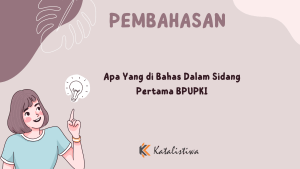 What was discussed in the First Session of the BPUPKI

What was discussed in the first BPUPKI session was the discussion regarding the formulation of a Basic State of Indonesia, namely Pancasila.

BPUPKI is organization which was founded by the Japanese which was established on March 1, 1945. BPUPKI is the Investigative Body for Preparatory Work for Indonesian Independence (Dokoritsu Junbi Cosacai). This organization has 64 members under the leadership of dr. KRT Radjiman Wediodiningrat. BPUPKI held two meetings. At the first session on 29 May-1 June 1945. At this first session, BPUPKI discussed the basic formulation of the Indonesian state. In the session there were ideas conveyed by three national figures, namely Mr. Mohammad Yamin, Prof. dr. Soepomo, Ir Soekarno Agency.

Finally, the basic formulation of the Indonesian state was agreed upon. Results agreement it is called the Jakarta Charter or the Charter of the Charter

In the second meeting on 10 July - 16 July, BPUPKI discussed the basic concept of law which consisted of preamble and body (article). The BPUPKI small committee which discussed the draft Preamble to the 1945 Constitution unanimously approved the draft made by the Committee of Nine.