The Deployment of Indonesian Sovereignty is Implemented After Taking Place

Welcome to Catalytic, a blog to discuss the discussion of subject matter from Higher Education, High School, Middle School and Elementary Schools. This time, Katalistiwa will discuss a question that is often asked in school exams. The questions are: The Deployment of Indonesian Sovereignty is Implemented After Taking Place 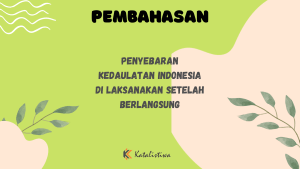 The Deployment of Indonesian Sovereignty is Implemented After Taking Place

The correct answer is D. Round Table negotiations

Detailed discussion on the Deployment of Indonesian Sovereignty

Willem Drees (Prime Minister of the Netherlands) as chairman KMB

Drs. Moh. Hatta as a delegate from the Republic of Indonesia

Van Maarseveen as the Dutch delegation

Critchley (UNCI) as a mediator

Prior to the implementation of the Round Table Conference, there had been 3 high-level meetings between the Netherlands and Indonesia with the same objective, namely recognition of sovereignty. The 3 agreements are:

The Round Table Conference ended with the willingness of the Netherlands to surrender sovereignty to the United Republic of Indonesia.

The contents of the Round Table Conference are as follows:

The Netherlands recognizes RIS as an independent and sovereign country.

The recognition of sovereignty was carried out no later than December 30, 1949.

The West Ireland issue will be brought up for further negotiation within 1 year of recognition of RIS sovereignty.

Between RIS and the Dutch government there will be a relationship between the Dutch Indonesian Union led by the King of the Netherlands.

Dutch warships will be withdrawn from Indonesia on the condition that several corvettes (small warships) will be handed over to RIS.

The Dutch Royal Army was withdrawn as soon as possible, while the Royal Dutch East Indies Army (KNIL) had to be disbanded on condition that the members needed would be absorbed into the TNI unit.