Islam entered the archipelago through 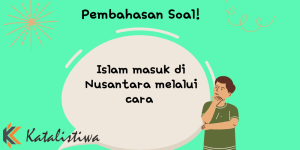 Islam entered the archipelago through

The answer to Islam is entering the Archipelago Territory through:   c. peace

Discussion on the issue of Islam entering the Archipelago Territory through:

Islam is the religion with the largest adherents in Indonesia. Islam enters Indonesia peace, via line trading. There are various theories about the spread of Islam that have been discovered by historians.

This theory argues that the spread of Islam cannot be separated from the role of Chinese traders who at that time were predominantly Muslim. No less important is the visit of Admiral Cheng Ho (Zheng He), a Ming Dynasty admiral who is Muslim and is accompanied by many Muslim members.

This theory states that Islam was brought by traders and scholars from Gujarat, India, as well as other port areas in India such as Malabar and Bengal. This theory is based on the fact that Islam in Indonesia which developed in the early 15th century is the same as Islam that developed in India, namely Islam with a Sufi model (influenced by Sufi schools).

However, this theory also has weaknesses, because Muslims in Indonesia adhere to the Shafii school, while the Gujarat community adheres to the Hanafi school.

According to this theory, Islam that entered Indonesia in the 7th century AD was Islam brought by the Shiites, Persians. This theory was born because of the customs in several areas that were influenced by Iranian culture, such as the shape of tombstones and the Tabuik culture in Minangkabau. However, this theory has a weakness, namely at that time Iran was not the center of the spread of Islam

Based on this theory, Islam entered the East Coast of Sumatra in the 7th century AD through scholars from Damascus, Syria, which was the center of the Umayyad dynasty. This theory is supported by the fact that the popular schools of Indonesia, especially in Samudera Pasai, is the Shafii school, which is also known in Arabia and Egypt. Then there is the use of the title Al Malik for the kings of Samudera Pasai, which is usually only found in Islamic culture in Egypt.

Details of Answers Islam entered the Archipelago Territory by means of

Material : Chapter 5 – The Age of Islamic Kingdoms in Indonesia

Keywords: The Entry of Islam to Indonesia