Explain the Background of the Rengasdengklok Incident

Welcome to Catalytic, a blog to discuss the discussion of subject matter from Higher Education, High School, Middle School and Elementary Schools. This time, Katalistiwa will discuss a question that is often asked in school exams. The questions are: Explain the Background of the Rengasdengklok Incident 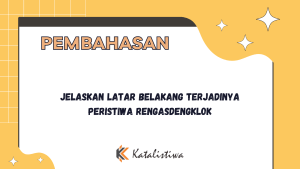 Explain the Background of the Rengasdengklok Incident

The Rengasdengklok incident was motivated by the desire of the youth to immediately proclaim Indonesian independence as soon as Japan surrendered to the Allies on August 15, 1945, to avoid the return of the Netherlands to Indonesia and avoid a power vacuum.

Detailed explanation of the Rengasdengklok incident

The Rengasdengklok incident was a kidnapping incident carried out by a number of youths from the "Menteng 31" association against Soekarno and Mohammad Hatta. This incident occurred on August 16, 1945 at 03.00 WIB by bringing the two figures to Rengasdengklok, a small town in Karawang Regency, West Java Province.

This incident was motivated by the desire of old figures in the struggle for independence, namely Achmad Soebardjo, Soekarno and Hatta who wanted independence to be proclaimed by PPKI (Committee for Indonesian Independence). However, the youth group was of the opinion that Indonesian independence should not depend on other countries, and did not want a declaration of independence by the Japanese-formed PPKI.

Young people also wanted independence to be proclaimed immediately after Japan surrendered to the Allies on August 15, 1945. The youth were worried that if they waited too long, the Dutch would return to Indonesia behind the Allies who won World War II.

The youths also wanted to avoid a financial vacuum (power vacuum) resulting from the Japanese surrender which resulted in nothing government in Indonesia.

Finally, the Proclamation of Indonesian Independence was read at Jalan Pegangsaan Timur 56, Central Jakarta, which is currently called Jalan Proklamasi. This place is the residence of Ir Soekarno.