Welcome to Catalytic, a blog to discuss the discussion of subject matter from Higher Education, High School, Middle School and Elementary Schools. This time, Katalistiwa will discuss a question that is often asked in school exams. The questions are: What are the national and international football organizations and what they stand for 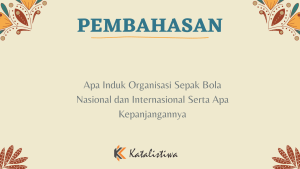 The national football parent, PSSI was founded on April 19, 1930 by Soeratin Sosrosoegondo. This organization recently joined FIFA in 1952 or two years before joining the AFC (Asian Football Confederation).

Meanwhile, FIFA was founded in Paris on May 21, 1904. This organization oversees 6 football confederations in the world, namely