Mention the Miracles of the Prophet Yunus AS

Welcome to Catalytic, a blog to discuss the discussion of subject matter from Higher Education, High School, Middle School and Elementary Schools. This time, Katalistiwa will discuss a question that is often asked in school exams. The questions are: Mention the Miracles of the Prophet Yunus AS 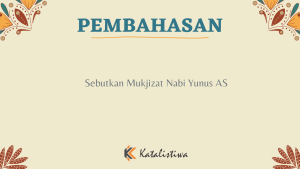 Mention the Miracles of the Prophet Yunus AS

The miracle of PROPHET YUNUS AS was being able to live in the stomach of a very large fish.

Detailed discussion of the Prophet Yunus AS

Of course this miracle with the permission of Allah SWT. Yunus as himself is one of the prophets of Allah SWT who was sent to show the straight path to the Ninawa people.

Then the prophet Yunus repented and repented to Allah in the belly of the fish.

"The prayer of Dzun Nuun (Prophet Yunus) when he prayed in the whale's stomach was: "Laa ilaaha illaa anta, subhaanaka, innii kuntu minadz dzaalimiin". (Meaning: There is no God who has the right to be worshiped except You (O Allah), Glory be to You, verily I am among those who commit injustice and persecution)