The chain of mountains that runs through the continent of Africa

Welcome to Catalytic, a blog to discuss the discussion of subject matter from Higher Education, High School, Middle School and Elementary Schools. This time Katalistiwa will discuss a question that is often asked in school exams. The questions are: The chain of mountains that runs through the continent of Africa 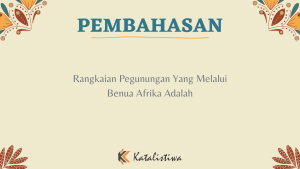 The chain of mountains that runs through the continent of Africa

The Atlas Mountains Are mountains in North Africa. This mountain stretches from west to east and separates the coastal areas of the Mediterranean Sea and Atlantic Ocean from the Sahara desert.

The Atlas Mountains stretch for about 2,500 km (1,600 miles) through Morocco, Algeria and Tunisia. The highest peak is Toubkal, which is in central Morocco, at 4,167 meters (13,671 feet). The Atlas Mountains are inhabited primarily by a Berber population. The terms for “mountain” are adrar and adras in Berber languages.

The Atlas Mountains are some of the few areas on the African continent where snow can be found.

Drakensberg Is mountains in southern Africa, through the territory of the countries of South Africa and Lesotho. This mountain reaches a height of up to 3,482 meters at the peak of Thabana Ntlenyana.

The name of this mountain comes from the Dutch language which means 'dragon mountain'. The climate is wet and cool in the highlands, which experience snowfall in winter.

The indigenous peoples of the region include the Xhosa, Sotho and Zulu peoples, as well as Afrikaner peoples who are descended from recent settlers. Dutch in South Africa.