How Does Evaporation Occur In The Water Cycle

Welcome to Catalytic, a blog to discuss the discussion of subject matter from Higher Education, High School, Middle School and Elementary Schools. This time, Katalistiwa will discuss a question that is often asked in school exams. The questions are: How Does Evaporation Occur In The Water Cycle 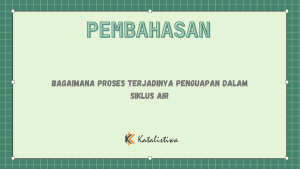 How Does Evaporation Occur In The Water Cycle

Water is a basic need for living things to survive. The water cycle cannot be exhausted because water undergoes rotation or cycles. Deep water ecosystem as an abiotic component plays an important role for the sustainability of the ecosystem.

The water cycle or cycle hydrology means the circulation of water from the atmosphere to the earth and then back again to the atmosphere. In the water cycle there are processes that must be passed, namely evaporation, transpiration, condensation, precipitation and infiltration. Earth is a planet whose surface consists of water and land, where water is much more numerous and extensive than land. There are several sources of water on Earth, including rivers, lakes, oceans, and groundwater.

Water is very important for the life of both plants, animals and humans. The following are the functions of water, namely:

The stages of the hydrological cycle are a series of integrated and interrelated processes. These stages have a circular shape and are therefore called cycles.

Evaporation is the process by which water in seas, swamps, lakes, oceans etc. evaporates due to the heating of sunlight. In the evaporation stage, water is converted into water vapor (gas) so that it can rise above the atmosphere.

Condensation is the process of changing water vapor into ice particles due to low air temperatures to form thick clouds.

Advection is the process of moving clouds horizontally from one place to another due to air pressure or wind.

Precipitation is the process of melting black clouds into water which is called rain. Clouds (condensed water vapor) turn into water and then fall to the earth's surface as rain due to the influence of warm winds or changes in temperature.

Runoff is the process by which rainwater flows into rivers, oceans, lakes and other waterways.

Infiltration is water that seeps and becomes groundwater or the process of absorbing water into the ground. Absorption of water into the soil is assisted by the presence of plants.

Various types of human activities that damage the environment and can affect the water cycle are as follows: